Home » About Us » Community Service Officer

The Hannibal Police Department takes the responsibility of animal control and welfare seriously. Improvements in equipment, training and uniforms have been achieved with the goal that service to the public improves.

Improvements in animal control and welfare ordinances are often sought by the Hannibal Police Department to booster the quality of life for the citizens as well as the animals in the community. Hannibal Animal Control Officers encourage pet owners to be responsible for their pets. Through responsibility it promotes a general well-being for the animals while up holding high standards of safety for the community.

The animal control officers are assigned to the Patrol Operations Division of the Hannibal Police Department. They are diligent in their efforts to uphold the ordinances set forth by the Hannibal City Government.

*** The City Code is updated/modified on a regular basis and this site may not be the most accurate-up to date information.  For the most current city codes, contact Hannibal City Hall  *** 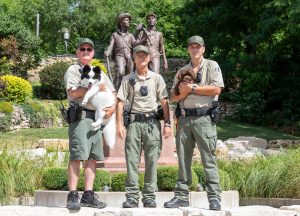 The following is a brief overview of several of the ordinances that are pertinent for an owner or keeper of an animal within the city limits of Hannibal, Missouri.

Limit on number of pets

The city of Hannibal has a limit of five animals (cats or dogs), with a limit of three cats, over the age of six months, taht can be housed in any one residential location within the city.

There are ordinances that pertain to cats, dogs and other animals that prohibit them from running at large on public property within the city.

When the owner or keeper of a dog takes the dog to a public place the dog is required to be on a leash not exceeding 10 feet in length.

Every dog that is over the age of six months that is housed within the city limits of Hannibal are required to be licensed. A dog license can be obtained by visiting the Hannibal City Collector at Hannibal City Hall - 320 Broadway, Hannibal, MO. This must be renewed annually.

No person shall keep or own a dog or cat unless it has been vaccinated by a licensed veterinarian.

Abuse or Neglect of Animals

No person will be permitted to abuse or neglect an animal within the city limits of Hannibal. Examples of abuse are intentional acts that cause injury or suffering to an animal. Examples of neglect are failing to properly provide food and water or shelter to your animal or failing to maintain proper control of the animal.

No person shall maintain an animal within the city limits of Hannibal that has been deemed dangerous. Examples of a dangerous dog is any dog that has been harbored for the purpose of fighting, any dog that has inflicted a severe injury, or when unprovoked chases or approaches a person on public or private property in a menacing fashion.

If you have a question or comment concerning animal control you are invited to contact the Hannibal Police Department at 573-221-0987.